Arsenal – where are the Gooners headed now under Wenger? (Part 2)

Continuing with my earlier rant about my beloved Arsenal FC, another point that’s usually made as to why we don’t perform very well against the top teams is the stadium costing a lot which meant Wenger couldn’t bring in players of the highest quality. Between the years 2005 & 2007, I could agree, but in 2007-08, the title was there for the taking, even with a supposedly weaker team. Same again in 2010/11 and 2013/14.

This season, we have arguably the best squad on paper in the league, with the Spurs and Chelsea squads in equal contention. There are no excuses to not at least challenge right until the bitter end and we have the capable players, so the manager has to be put in question.

The board should not escape criticism either. Their ambition for Arsenal is telling when they allowed Wenger to release news that he has been offered a two-year extension after losing to Watford and Chelsea in the space of 5 days. They seem to be happy with mediocrity because the money they take out of the club is good for them. I say to the board: what about the fans, who are the lifeblood of the club? 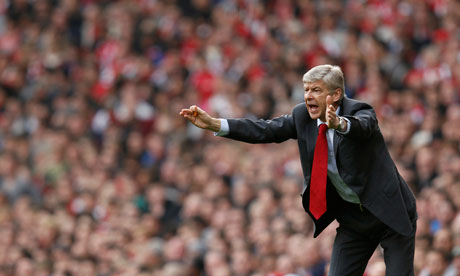 It is obviously not very easy to win the league, nor is it easy to attract the best players in the world to your club. It’s a very competitive league, and I understand fans of other clubs would love to be in our position. However, when you look at how much it costs to watch the Arsenal in comparison to other Premier League clubs and the elite clubs around Europe, you will realise Gooners are paying extortionately premium prices. As a result, I feel it is well deserved that these fans are able to see their team at least play with the desire to win when it counts, let alone winning a league title or Champions’ League from time to time. When the Arsenal’s cheapest season ticket is more expensive than United’s most expensive season ticket, you know there’s a problem.

The last point, which a lot of AKBs stand by, is Wenger’s beautiful brand of football that Arsenal play. Now this shouldn’t be news to most, but we haven’t played attractive football regularly since the 2010/11 season, and maybe shades have come through during that time. So, that is not an argument as to why we should accept Wenger’s and the mediocre results he has brought to the club in the last 12 years.

To round up, I am part of the WOB, and of the opinion that Wenger should leave the club at the end of the season if he still wants to be manager, or become a director of football and let someone who is younger, less stubborn and more passionate overtake the managerial reigns because seeing the same stale performances is ridiculously frustrating and unfair to the loyal fans who have stuck it out and supported the team through these unsavoury years.

Author: Dami
Filed Under: Football
Arsenal – where are the Gooners headed now under Wenger? (Part 1)
Leicester City – from zeroes to heroes…back to zeroes?