After the subdued FA Cup win at Sutton (not that it should be noteworthy considering the opposition), the Arsenal team had 2 weeks off before the visit to Anfield and yet another big game. Even so, there was still a lot of speculation around the club. Why aren’t Danny Welbeck and Lucas Perez starting? Will Alexis Sanchez sign a new deal? And most importantly, is Wenger leaving at the end of the season? (hopefully he does, so I won’t have to vent yet again…)

Alas, the day arrived when Arsenal had to show their mettle against a Liverpool team who had just lost to a newly manager-less Leicester City, but, under Jürgen Klopp, have had the best record this season against the Premier League’s top six. It was important that the Arsenal team at least came into the game prepared, because Liverpool were looking to bring some fire after their Monday night loss. How poignant then that Wenger himself added fuel to those flames when he decided to drop Alexis Sanchez for the game??!! The Scousers must’ve been buzzing when they saw that. And no, he wasn’t injured. Wenger’s initial reasoning was that he wanted Giroud instead because we could play “more direct”. Hmm, you can be the judge of that…

As it happened, we played poorly in the first half, conceding 2 soft goals considering we’re a team supposed to be equipped to compete for the league title. It’s fair to say the Arsenal players gave no account of themselves, and although Liverpool were playing well, they were helped by the fact our defence and midfield looked like they’d never seen each other before.

In the second half, Alexis came on and this massively lifted the team as he brilliantly assisted Welbeck after 10 mins to make it a contest. Then, with 15 minutes to go, Wenger decides to remove all doubt about his incompetency by taking off Welbeck AND Giroud?? I’m not sure how a team chasing the game can play direct football or even cross it into the box effectively when their 2 tallest attacking players are taken off… 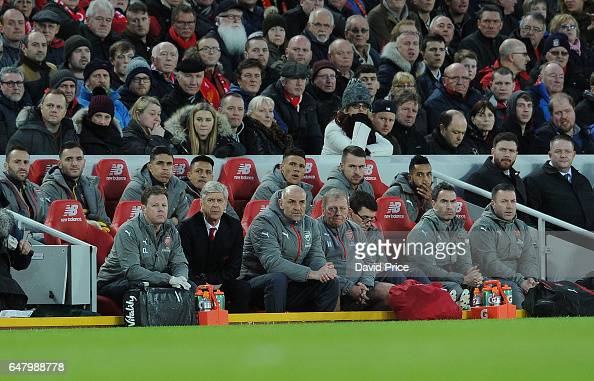 Wijnaldum scoring the third goal late on summed up the game, as we couldn’t create very many chances, and Liverpool counter attacked, although Wijnaldum ran by our whole midfield line, and pretty much most of the defence, to tap in the box unmarked. Woeful. Lost. Gutless. Those 3 words could probably sum up a lot of Arsenal’s performances in big games over the past decade.

Some reports are suggesting that Wenger dropped Sanchez because of a bust up in the training ground, but it seems as though he’s being punished for wanting to win A LOT more than anyone else in the club, particularly his fellow players, Arsene Wenger and the board. I honestly can’t see him signing a new contract at Arsenal, and to be frankly honest, I don’t blame him.

Whether Alexis leaves or not is one thing, but the person who needs to go most is the manager in my opinion. He seems to have lost the dressing room and is making absolutely absurd decisions before and during games. His tactics are a mystery to everyone watching and probably unknown the players he sends out. And his excuses are becoming laughable. When we were thrashed against Bayern Munich, we were “mentally jaded”, but after a fortnight’s break, the team has “lost their rhythm”. It’s strange, I didn’t know a team that loses 5-1 could have rhythm. The atmosphere at Arsenal is like a long-term marriage that has been failing for years, the couple (board and Wenger) papering over the cracks with small accomplishments here or there. But the kids (fans) can see that it’s done. Arsene, thanks for the memories, but it’s time to go.